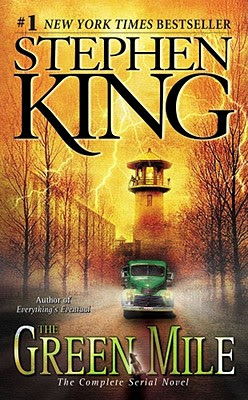 My son is always trying to get me to read Stephen King books.  I think he may possibly be Mr. King's biggest fan.  Although I love the way Stephen King writes, I'm not a big fan of his usual genre.  So when our book club chose The Green Mile to read, I was a bit skeptical.  I never saw the movie, but I had a general idea of what it was about.  I tend to gravitate to uplifting, happy books, and a book about death row inmates seemed very depressing.  I figured I'd read it quickly and get it over with so it wouldn't bring me down for too long.

Shortly into the first chapter I knew I was going to love this book.  King writes in such a suspenseful way, I had a hard time putting it down.  Throughout the chapters he gave little glimpses of what was to come - piquing my interest with every turn of the page.  The characters were endearing enough to make you forget that they were actually death row villains.  He included just enough fantasy to balance the morose.  I was actually sad to get to the end of the book because I enjoyed it so much.  It's my favorite Stephen King book so far.

Of course, after reading the book I had to rent the movie.  I thought the casting was dead on!  The actors looked exactly as I pictured each character in the book.  The movie is never as good as the book, but this one was definitely close.  I'm glad the movie left out the part about the mean employee at the nursing home - that was my least favorite part of the story.  All things considered, I give both the book and the movie 5 stars.

Sun & Moon Creations:Handcrafted Vegan Soaps (email me if you'd like to order)